Nigerian Who Scammed Payday Lender Out Of £3M, Gets 6 Year Jail Term 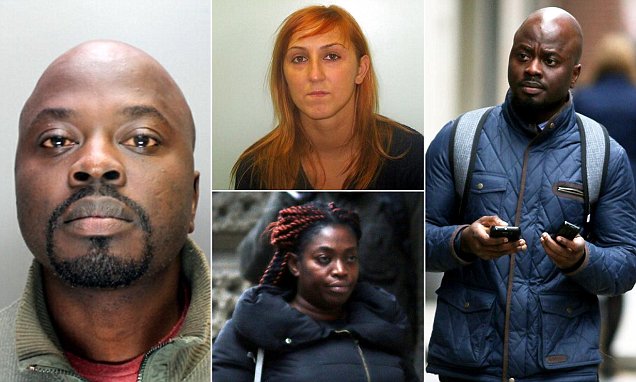 Kelvin Okusanya, 32, was the mastermind behind a £3m Wonga scam which used the identities of thousands of innocent members of the public to withdraw cash. He was part of a gang which exploited the company’s website algorithms to make more than 19,000 loan applications using the same password ‘Bengali90′. The cash was then laundered through hundreds of bank accounts, while the unsuspecting victims were left facing paying the 1% a day interest payments. Okusanya was today, jailed for 6 years. The names and details of wholly innocent members of the public were used to make fraudulent loan applications on a massive scale. Some were even contacted by Wonga for the loans they had not applied for and knew nothing about.
(adsbygoogle = window.adsbygoogle || []).push({}); 8 others were convicted of laundering the proceeds of the cash through bank accounts under their control. Olumuyiwa Fasoranti, 32, was jailed for 3 years, Sophia Pusey-Carroll, 46, was jailed for 21 months and Monika Solarz, 28, was jailed for 18 months. Omotola Wellington, 31, was sentenced to 2 years imprisonment suspended for 2 years, Maureen Ako, 35, was sentenced to 15 months imprisonment suspended for 2 years and 200 hours unpaid work, and Sherene Bascoe, 21, was sentenced to nine months suspended for 3 years and 140 hours unpaid work. Michelle Deola, 23, was given a community order with 100 hours unpaid work, and Kerone Clayton, 42, and Clement Bankole, 38, were given community orders with 40 hours unpaid work. So guys.. if you were wondering why kelvin didnt come home for christmas. guess you do now

LMAO! Checkout How A Guy Lost A Job Because He Listens To Lil Kesh 'EFEJOKU' Song